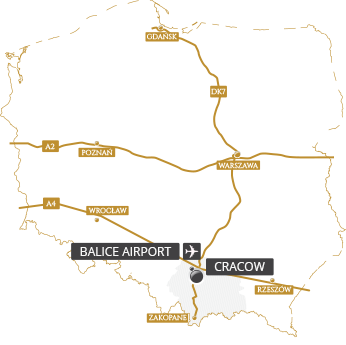 The coronation city of Polish Kings

The European Capital of Culture

The seat of 23 institutions of higher education

The Cradle of Culture: 11 theatres,
the Opera House and Philharmonic Hall

Cracow, located in the southern part of the country, is the second largest city in Poland in terms of number of inhabitants and is the centre of cultural, education and science,  administration, economy and tourism of the country.

It is located on the route of the key transportation hubs in Poland. The second largest airport of internal importance in Poland located in neighbouring Balice is named after Pope John Paul II.

Historically, the first mention of Cracow comes from the second half of the nineteenth century. Stare Miasto (the Old Town) is the oldest area of Cracow, which makes Stary Rynek (the Main Market) one of the largest squares in Europe.

Wawel Castel  is part of the Old Town, which from the fourteenth century on was the site of royal coronations. The area of the Old Town with the Wawel Castle, Kazimierz and Stradom was entered into the first list of the UNESCO  World Cultural Heritage.